I’ll preface this entry with an introduction on how to use annotation for Stymie and how the pieces move.  If you are looking at the board and the logo is in the lower right corner, the space in the lower left corner is A1.  The space in the upper right corner is G7.  Stones move 1 space orthogonally, or jump friendly and/or  opposing pieces orthogonally.  Multiple jumps are allowed.  When an opposing piece is jumped, it’s removed from play.  When a friendly piece is jumped, it stays where it is.  The Antipode has a Silver side and a Gold side, and whichever side is face up indicates which player controls it.  The Antipode can’t jump.  It moves orthogonally like the Stones, but unlike the Stones it can move any number of open spaces (like a Rook in Chess).  When the Antipode is jumped, it flips to the opposite side regardless of which player jumps it.

In Stymie there is no such thing as a Fool’s Mate, but a player can set his or herself up for a swift and crushing defeat with a directionless beginning game.  Like Go, all the pieces in each players army are equal, and both players start with no pieces on the board.  The Antipode, which begins each game on the center space, is owned by neither player, can be be controlled by either player, can’t capture or be captured, and doesn’t count toward any victory conditions.  But…, it has the potential to be the most pivotal piece, and when used well can be a dominating force.

Gold plays first, and due to the rules for placing new pieces on the board, has a chance to gain a one stone advantage by the time players transition into the movement phase of the game.  Gold’s material advantage is counterbalanced by the fact that Silver begins the game controlling the Antipode, as well as having a chance to establish initiative. 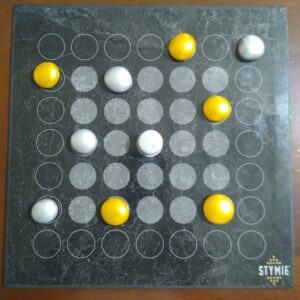 In the image above, it’s Silver’s turn and there aren’t any open spaces to place a new piece on the board.  Gold has established the beginnings of a stronghold with his pieces on C2, F2 and F5.  What should Silver do?  B4 – B3 is a strong move.  No matter what Gold does with the stone on C2 it can be threatened on Silver’s next turn.  Ultimately Silver will either be able to enter another stone into play, or capture Gold’s piece and eliminate a potential triangle.

In opening stages of the game, being able to read the board better than your opponent will not only help you determine where to place each new stone, but also how to form your strategy.   If you can envision a way to gain initiative, strengthen your position, gain a material advantage, or weaken your opponents position , you have a plan to build on.  If you can accomplish any of those four objectives while preventing your opponent from gaining a different advantage, you have taken the first few steps on the road to victory.  But tread carefully, there will be lots of forks in the road along the way, and a wrong turn can lead you right off of a proverbial cliff.