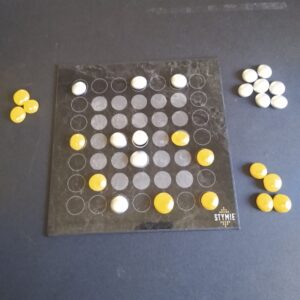 Many times when playing Stymie, a player will be faced with an attack that will leave him totally devastated if his opponent is able to execute his plan.  In the game illustrated in today’s post, at first glance, the board looks fairly even, as both players have 6 pieces in play.  Silver has a much stronger Reserve though because he’s captured 4 Gold stones, and Gold hasn’t captured  any of Silver’s pieces.  Additionally Silver has control of the Antipode and he’s threatening a double capture of the Gold stones on F4 and G3.  If Gold can’t come up with a way to balance the scales, his demise is certain. 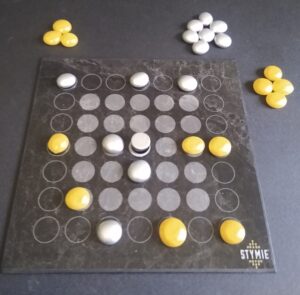 Gold counters the looming attack by moving G3 – G4.  This move not only eliminates the threat of the double capture, but at least temporarily keeps Silver’s stone on C4 locked in place.  If Silver chooses to move that piece at this point, not only would he expose it to capture, he would also allow Gold the opportunity to seize control of the Antipode. 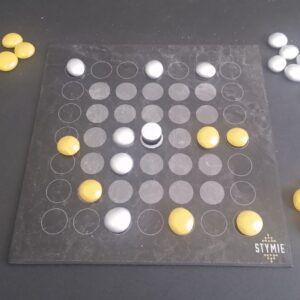 Silver responds with D3 – C3 to threaten the Gold stone on B2 for his 5th capture.  Gold could move out of danger with B2 – A2 thereby protecting his piece, but instead he leaves it to be taken and chooses instead to start advancing the stone on E1 into the fray. 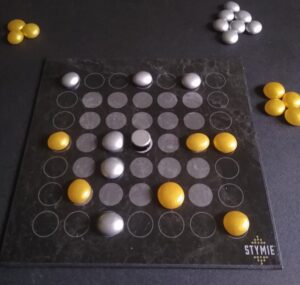 Gold’s stone on B2 is vulnerable to capture, yet he leaves it there for the taking.  Is it this an oversight or miscalculation, or is it a gambit to spring a trap?  In surveying the board, Silver sees the opportunity to capture 2 stones for one. 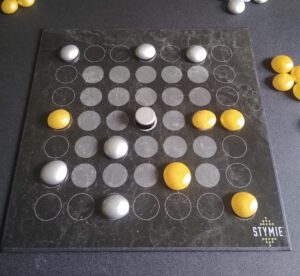 Silver realizes Gold can take control of the Antipode and capture his piece on C3, but he can counter strike again with C1 j C3 (capture C2)!  That will have him 1 capture away from victory! 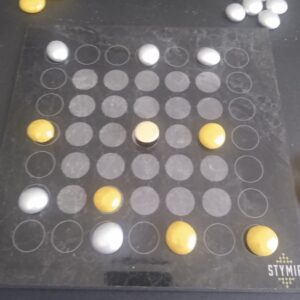 Unfortunately for Silver he overlooked the fact that if he left the stone on C3 exposed for Gold to capture, it would leave him with no stones on a Prime Space and he suffers automatic defeat. This is a great example of how one hasty move can turn a strong position into a sudden loss.